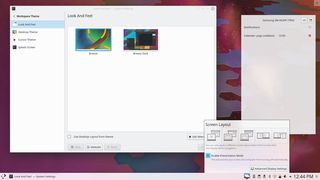 Plasma is KDE's lightweight and full featured Linux desktop. For the last three months we have been adding features and fixing bugs and now invite you to test the beta pre-release of Plasma 5.14.

A lot of work has gone into improving Discover, Plasma's software manager, and, among other things, we have added a Firmware Update feature and many subtle user interface improvements to give it a smoother feel. We have also rewritten many effects in our window manager KWin and improved it for slicker animations in your work day. Other improvements we have made include a new Display Configuration widget which is useful when giving presentations.

Please test and send us bug reports and feedback. The final release is scheduled for three weeks' time. ”