Yes, Metra can coordinate with Pace... 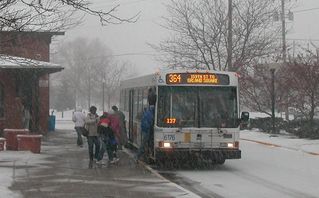 ...at least slightly and briefly. With Metra Electric shut down due to weather (and probably poor design of catenary, but that's just my guess) they're running two Pace buses this afternoon only to stations along the Electric main line. Tomorrow the Electric Line riders are told to use the Rock Island or CTA Red Line, both some miles distant tho there are some bus connections. But the point is that it can be done, Pace buses can substitute for (or supplement) Metra service, which could, in an intelligently-managed system, allow more off-peak runs.

Here is the announcement (which probably will soon disappear) from Metra's web site. Metra Alert ME - Metra Electric will have 2 buses tonight ONLY, buses will arrive at the southwest corner of Michigan Ave. and Randolph Street at 4PM and depart at 430PM

Metra has worked with Pace to provide limited bus service to Metra Electric Line stations in the south suburbs. Two buses will be positioned Wednesday afternoon near the southwest corner of Michigan Avenue and Randolph Street near Millennium Station’s entrance. The buses will arrive at 4 p.m. and depart at 4:30 p.m. One bus will make stops at the Kensington, Riverdale, Ivanhoe, 147th Street, Harvey, Hazel Crest, Calumet and Homewood stations. A second bus will make stops at Flossmoor, Olympia Fields, 211th Street, Matteson, Richton Park and University Park. A Metra manager will be on board each of the buses to assist Metra passengers.